Christoph Engel, the Master Wizard of Ubersreik requests your party to recover a powerful artifact from Castle Drachenfels before the skaven can aquire it. It sees the heroes finding a way into the castle, before making their way to the artifact hall. After retrieving the artifact the heroes escape through a trap door followed by an escape route with closing gates which lead to a skaven breach.

The first Tome can be found behind the gate to the left after entering Castle Drachenfels through the skaven hole. It can be reached through a path opening up on the left side shortly afterwards.

The second Tome is hidden in the room to the right side after pushing the lever to open the secret door and can not be reached anymore after jumping down to the dining hall.

The third Tome can be found by sticking to the right side after passing the dining hall and can be picked up upon reaching yet another locked gate with a room to the right. It is stored in the back of this very room.

The first Grimoire can be picked up by jumping down to the lower floor in the room following the blood fountain. This can be achieved thanks to a broken vase located on the opposite side of room.

The second Grimoire is located in a room on the opposite side of the drop down to the statue event. An ammo crate as well as a small wooden scaffolding marks the location and the Grimoire can only be reached by jumping to the other side and keeping to the right side. It's hidden in the last room on top of a bookshelf in the back left corner.

The heroes objective is to locate all three statues and placing them into their sockets in the middle of the hall. One or two of those statues are protected by three stormvermin which can be lured out with loud weaponry such as the Blunderbuss or Grudge-Raker. It's generally advised to secure the lower level statue first (located in the back of the hall) as it's the least defend-able one. There are also supplies on the table next to it. The statue can be thrown over the railing on either side of the stairs as a shortcut.

The most important aspect of the final escape is to stick together and keep an eye for enemies coming from behind. It's generally advised to take the rightmost route as it's more narrow than the middle one and closer to the exit than the left one but every route should be fine. Closing gates are randomized so don't expect to find the optimal escape route. The last meters after leaving through another hole and reaching for the wagon can be critical as well and should be taken with care. 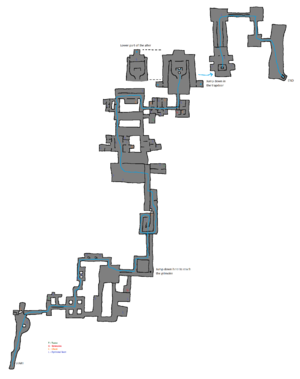