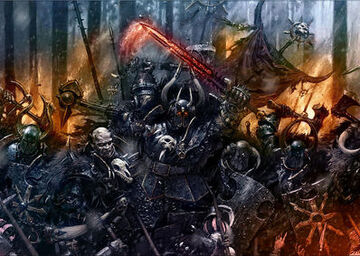 The Chaos is one of lore in Vermintide.

The Chaos is the definition of evil. The Chaos Gods enjoy seeing a world that is ripping itself apart by endless war. Every creature can become a follower of Chaos such as Elves, Dwarfs and even Ogres. Chaos has many powerful demons and warriors who fight for them until death, even one chaos warrior will be a problem for our Heroes. Chaos will be the one responsible for beginning The End Times and destroying the known Warhammer world.

Skaven are considered a spawn of Chaos and will be also responsible for destroying The Empire. They raided and attacked many cities in The Empire just like Ubersreik where this game takes place.