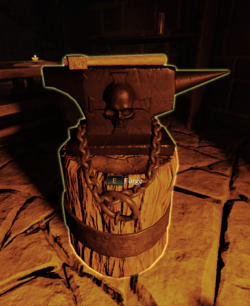 The Forge is a workstation in the Red Moon Inn allowing players to perform certain operations concerning their Weaponry. 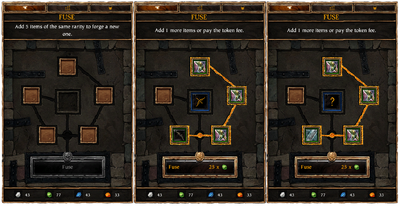 The Fuse tab allows players to fuse their low tier weapons into one of higher rarity. Up to five weapons can be used for a single fusing operation. Each empty slot has to be compensated by paying shards of the same rarity instead. Shard cost is not linear, and can be checked by referring to the following chart:

The type of item created is determined by which the type of lower tier weapons that are Fused. Each weapon fed into the Fuse operation will provide a chance for the end product to be of that type. Chances to get a certain Weapon type are added together if multiple weapons of the same type are fused.

Thus, to guarantee a particular type of weapon is generated by the Fuse operation, fill the slots only with that type of weapon; simply pay the token cost if less than five of that weapon type are available in the inventory.

. With certain traits you will see a variable percentage chance for the Trait to trigger on each enemy hit, each enemy killed, or other such events. An example is the "Bloodlust" Trait, that gives a "3.0%-10.0%" chance for the wielder to be healed for 10 health when an enemy is slain with the weapon. The weapon's actual percentage will fall somewhere within the displayed range (say, "...6.5% chance to recover 10 health...") , but the actual percentage will only be revealed when the Trait is unlocked at the Forge. Note that although the percentage chance is only revealed when Unlocked, mechanically, the percentage is already set at the moment that the weapon was obtained (either from a Bounty Board Quest Reward or Mission Completion Reward). If desired, the percentage chance for each variable Trait can be improved by using the Invocate Tab at the Shrine of Solace. 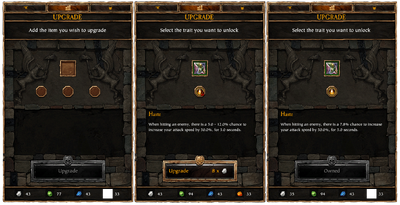 You scrap unwanted Items to obtain Tokens in return, by melting them down in the Salvage Tab. Items will generate a certain random number of Tokens once salvaged. The tokens generated from Salvaging an Item will be the same color as the Item's quality.

Unlike the Fuse Tab and Upgrade Tab that only involve Weapons, the Salvage Tab can also scrap Trinkets.

The process does not finalize until after the progress bar has filled with fire and the token amount is displayed. Switching tabs, or exiting the Forge, will cancel the Salvage process. 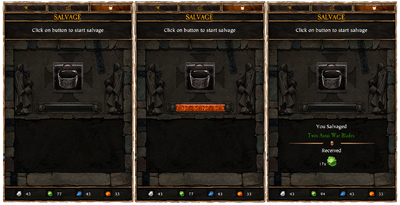