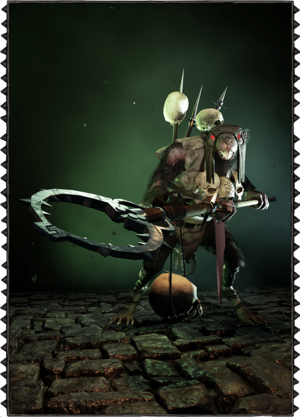 The Packmaster is one of the Enemies in Vermintide.

Packmasters are Clan Moulder Troops tasked with driving packs of ravening beasts into battle using whips and intimidation to spur their charges into a frenzy of teeth and claws. However, the Packmasters hired by Clan Fester in their assault on Ubersreik are predominantly equipped with things-catchers, a pole arm designed to incapacitate opponents by strangulation. It is still unknown why Clan Fester has paid the extra Warpstone tokens for this somewhat unusual specialization.

Without support from the rest of the group, the heroes will face inevitable death when caught by a Packmaster. After catching his prey, the Moulder-kin will first try to put as much distance as possible between the captured hero and the rest of the team. When ready, the Packmaster will hoist the helpless victim into the air, and end the hero's life through a gruesome hanging.