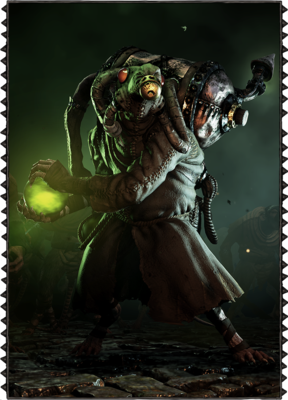 The Poison Wind Globadier is one of the special Skaven you can encounter in Vermintide.

These Skaven wear their signature robes and gas masks while carrying a heavy re-breathing apparatus. The Poison Wind Globadiers have actually strapped a ticking time bomb on their backs, since the container is filled with highly combustible warp-gas. These hired elite soldiers can be heard from quite a distance, clanking and wheezing their way into battle, whilst preparing their globes with deadly green gas to be flung at their enemy. Upon impact, the globe shatters and spreads the toxic fumes, dazing and damaging any who might be caught in the resulting cloud. Life is cheap in the eyes of the Skaven, and the Globadier does not care if Clanrats are caught within the cloud along with the targeted enemy.

If the heroes manage to cause heavy damage to the Globadier, it will go into a frenzy as its apparatus has been breached and becomes unstable. The Globadier will then charge the players in a suicidal attempt to take them out. If they don't manage to kill it in time, the Globadier and its equipment will explode in their midst.