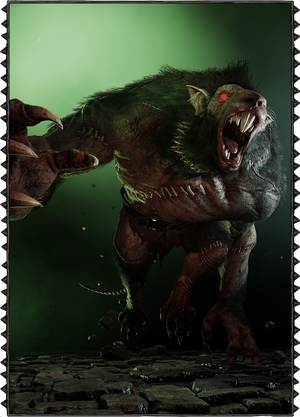 The Rat Ogre is one of the Enemies in Vermintide.

Few enemies are as terrifying or as dangerous as the primary export of clan Moulder; the Rat Ogre.

As their name would suggest, these hulking monstrosities tower well above the head of any man, elf or certainly dwarf that would stand before them. Their tremendous strength and surprising agility has meant the end of many a would be hero. Considering their voracious appetite to boot, it was not likely their end was graceful.

Upon hearing the terrifying roar of the beast, one would do best to seek allies. Further; for all its strength, agility and considerable odor, the beast is lacking in intelligence. Capable of focusing on only a single foe at once, it is best to note whom the beast has settled upon as its next meal and prevent the creature from tasting anything more than steel and flames. For those unfortunate enough to be locked within its maddened gaze, escape is unlikely. Though defense is not impossible, expect to be winded and flying backward even from a successful attempt, unless one has the skill to parry his blows immediately as they arrive.

For those with explosives and tinctures of strength or speed, the Rat Ogre provides an excellent excuse to use them immediately.