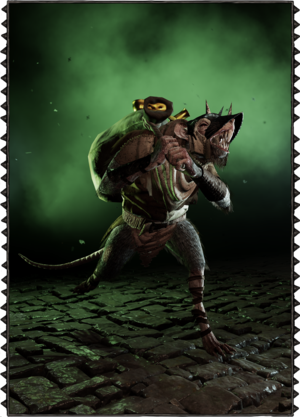 The Sack Rat is one of the Enemies in Vermintide.

"Among Skaven, Warpstone is the most coveted resource and is commonly used as currency. Slaves, weapons and armour are the other necessary tools in the scheming and brutal scramble for power that is the Skaven existence.

Unlike the Humans and Dwarfs, the Skaven masses see no inherent value in gold and a lowly Clanrat would most probably ignore a coffer full of a treasure for some juicy meat, a rusty sword or the tiniest speck of Warpstone.

Shrewd Skaven leaders with ambition and vision however, see the value of gold and valuables as the means to influence and corrupt the greedy man-things of the surface world.

Among the Clawpacks of warrior vermin assaulting Ubersreik, there are reportedly Skaven agents carrying large sacks and seemingly acting independently from the invading force. They scour the town for valuables, most likely on orders from an enterprising chieftain or warlord, pouncing on the opportunity to expand their influence"

"Should such a Skaven, or ‘Sack Rat’ as the troops have dubbed the blasphemous thing, be cornered and killed, a resourceful citizen can lawfully procure the contents of the sack of loot, if said contents are used in the battle against the invading vermin hordes."