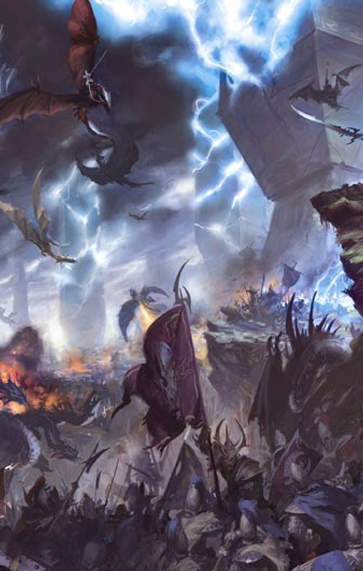 The Skaven is the primary enemy encountered throughout the course of Vermintide.

The Skaven are treacherous rat folks that live in underground tunnels that stretch to every corner of the old world, also known as The Under Empire. They know no trust and prefer backstabbing instead of a fair fight. Every Skaven sees himself superior above all else, which means that the Skaven won't fight alongside any other race of the Warhammer world. The only thing that keeps the Skaven from mass slaughtering themselves is the Council of Thirteen.

The Council of Thirteen contains 12 of the most powerful Skaven lords titled ''Lords of Decay''. The Horned Rat is figuratively the 13th member. The Skaven do not know loyalty, only fear. Fear is the only thing that keeps them from betraying the council. Any Skaven stupid enough to do so will quickly be taken care of by one of the many Skaven assassins in the under empire. The Council gathers in the city of Skavenblight which is the heart of the Skaven under empire. The Council is the only thing that can organize a Skaven army to attack what lies above them.

A race of bipedal rat humanoids, the Skaven are covered in fur from head to toe except for their ears, muzzles, hands and worm-like tails. Their eyes gleam red in the light and their mouths are lined with razor-sharp teeth designed for ripping and tearing, particularly their dagger-like incisors. In terms of size, the average Skaven is slight of build and can stand up to between four and six feet in height when not in their usual hunched-over posture.

Fur colour can be used to identify a Ratman's rank. While most Skaven are brown or piebald, larger or more deadly specimens such as the Stormvermin and Rat Ogres have visibly darker fur than their kin. White or grey fur on the other hand denotes leadership, intelligence and possibly sorcerous abilities. It is speculated among surface dwellers that this is to help distinguish leaders in the dark underground tunnels.

The Skaven are a twitchy and constantly agitated species, owing to a metabolism that burns energy at a tremendous rate, which also gives them unnatural agility and speed. Another side-effect of this is their equally unnatural hunger, driving them to gorge themselves on the corpses of the fallen of either side. A Skaven unable to replenish itself will visibly weaken and die.

Female Skaven are rare and lethargic in nature, seemingly existing only to give birth to huge litters of Ratmen at alarming rates, arguably making the Skaven the most numerous of all the races in the Warhammer World.