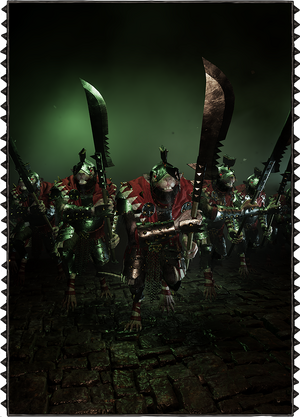 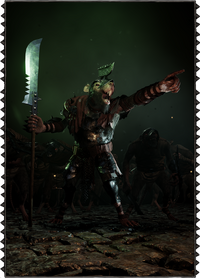 The Stormvermin is one of the Enemies in Vermintide.

Wearing heavy armour, red cloth and a crest adorned helmet, the Stormvermin are among the fighting elite of the Skaven clans. Well trained in the use of halberds, they are a tough challenge in one on one combat. Stormvermin will mix up stabs, swings, blocks and parries to always keep players on their toes. The Stormvermin are often seen ordering the Clanrats around, shouting instructions and egging the rest of the army on, thereby bolstering their aggression. They are leaders in battle, and will not break and run as easily as the rest of their kind.

Facing a lone Stormvermin can be quite a challenge, but taking on a whole Patrol is borderline suicidal. Using their tactical training the Stormvermin Patrol will quickly surround individual heroes, and with just a few well placed blows, bring the player to his knees. If the patrol is engaged, the players must work together and constantly be aware of their surroundings if they are to survive. The Stormvermin Patrol is the only enemy in Vermintide that can be avoided, if you manage to sneak past them. While you may risk bumping into them later as they continue their patrol, avoiding them is often times the safest and best bet. Accomplishing mission objectives is what will win the war, not suffering unnecessary casualties in pointless engagements.