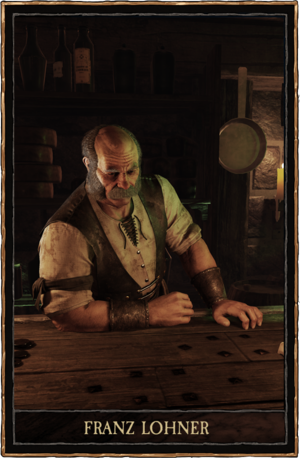 "Franz Lohner is innkeeper of the Red Moon Inn and a pragmatic man. Simultaneously, Lohner is a bit of enigma. He knows more than he should, but drip feeds that information out as he needs to. He takes the role as an affable, authoritative landlord, but can be more than scolding if his adopted charges disappoint or underperform."

Franz Lohner has seen Ubersreik turn from a prosperous town to doomed settlement and taken it in his stride. In fact, he seems to know far more about the situation than any man should, more than the Burgomeisters or the squabbling nobles who seem only interested in the grand masquerade.

Perhaps this is because of the persistent rumours of Lohner’s past. He arrived to take over the Landlordship of the Red Moon over a decade ago, but not much is known of his previous career.

The rumour-smiths swear he is ex-military and that can be seen in his bearing and practical nature. But the very best rumour-smiths insist there is much more to Lohner. That he was and, indeed, still is, a member of the Emperor’s Eyes – a highly secretive organisation, a spy network led by the inscrutable ‘Black Count’ who, if the myth is believed, answers directly to Karl Franz himself.

But this is all conjecture, stuff that Lohner would laugh off if you ever had the gall to approach him directly. He is just a humble Innkeeper, albeit one more prepared than most.