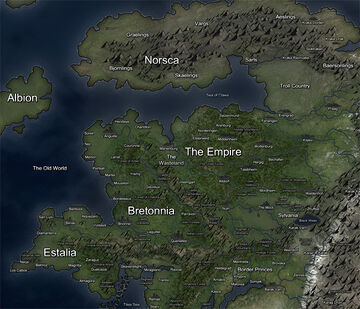 The old world is a continent of the warhammer world. Although the humans are Dominant in this continent there are still many other races to be found. There exists no peace in the old world, only war. Greenskins hordes from the south, Chaos in the north, Skaven attacks from their underground lairs, marching armies of the undead and large scale raids by dark elf fleets. In these situations mankind tries to hold its mark in the old world and protect itself from outsiders.

The empire has stood over 2500 years as the most powerful nation of men. The Empire uses powerful knights, warriors, guns, cannons and mages to protect itself against the most vile beasts of the warhammer world.

Kislev was founded around 1000 years after the Empire and is the only thing that divides the Empire with the lands of Chaos. Kislev uses bear cavalry to trample the biggest Chaos warriors.

Tilea is known for having very skilled traders. Most warfare in Tilea conducts trough the hiring of mercenaries.

Estalian steel is famed throughout the Old World for its quality and was famously invaded by a Sultan of Araby.

Bretonnia is being considered the 2nd most powerfull human nation in the old world. Bretonnia doesn't use blackpowder but they use very powerful knights no other human nation could go up against.

The Border Princes are a collection of city states that are regularly attacked by the Greenskins, Beastmen and other marauding forces of the warhammer world.

Sartosa is a island at the south coast of Tilea. Sartosa is ruled by a pirate king and made it a haven for criminals. They often raid coastal settlements but have been also known for defending them.

Norsca is located in the far north of the old world. The Norscans are ferocious warriors that live in tribes and regularly attack eachother. Many Norscans have also been conducted to the power of Chaos in search of becoming a deamon prince.

Albion is a small island in the great ocean near the old world where it rains everyday. The island. is shrouded with heavy fog and is roamed by human tribes.