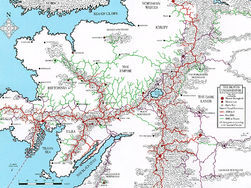 The Under Empire is one of locations in Vermintide.

The Under Empire also known as Skavendom holds an uncountable amount of miles, tunnels and passages that stretch from the icy peaks in the north to the deserts in the south. The Under Empire was entirely made by Skaven and is the biggest empire known in the Warhammer world. The capital is the city of Skavenblight and lies at the heart of the Under Empire.

The Empire and The Under Empire[edit | edit source]

There are also many tunnels below the ground of The Empire. There is even a tunnel under their capital city, Altdorf. Although the Skaven are almost everywhere under The Empire, they rarely go above ground. If they do go above ground, they do so in numbers. Skaven rarely raid villages in The Empire, yet it is far more common in Bretonnia. Skaven were a scary story told to scare children in The Empire before The End Times came.